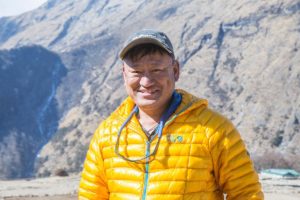 Ang is a mountain guide living in Kathmandu, running his own company called Ang’s Himalayan Adventures. He guides a variety of expeditions throughout Nepal, from high altitude and trekking peaks to remote areas for mountain biking and rafting. Most of his clients are from Australia, the UK, New Zealand, the Maldives, and the United States. Ang grew up in Darjeeling, India and received a degree in engineering from the Hindustan Institution of Engineering Technology, but he has been climbing and guiding in Nepal since 1991. In 1999 Ang reached Everest’s South Col. Outside of Nepal, Ang participated in a NOLS course on Wyoming’s Wind River in 2008, worked with Reni Jackson and the Jenny Lake Rescue Rangers in the Grand Tetons in 2009, and acted as a volunteer ranger on Rainier in 2010. In 2011 he was granted the opportunity to partake in the ALCF National Parks Exchange program, where he participated in a Denali ranger patrol. Ang has also guided in India, Pakistan, Tibet, and Bhutan, and annually works summers in Iceland with the company Glacier Guides. He also guided the all-female 7 Summits Nepalese team to their first summit of Denali. Some of his other climbing achievements include: Lhakpari (Tibet), Kang Yatze (India), Mera Peak (Nepal), Island Peak (Nepal), Lobuche Peak (Nepal), Pachermo Peak (Nepal), Denali (Alaska, USA), Rainier (Washington, USA), the Grand Teton (Wyoming, USA), K2 Basecamp (Nepal), and Gondogoro Pass (Pakistan). As if these aren’t enough, Ang has also biked from Lhasa, Tibet to Kathmandu, Nepal, and has rafted down the Colorado River in Grand Canyon National Park (United States). When he isn’t guiding, Ang can be found doing nonprofit humanitarian work throughout Nepal. After the 2015 earthquakes, Ang led teams to rescue and medically treat people buried in rubble throughout Nepal. He has helped rebuild villages in Nepal, as well as provide them with food, shelter, and medical supplies. He also partnered with the Nepal Kayak Club in these efforts and they received the “Paddle with a Purpose” award for their rescue expeditions and supplies deliveries. His work has recently been featured on the NOVA/PBS documentary, “Himalayan Megaquake.” Ang has been with KCC for 11 years, an instructor for 10 of those years, and a lead instructor for 8 of those years. He is excited about KCC’s ability to foster leadership in tourism and climbing safety from villages in the Khumbu.